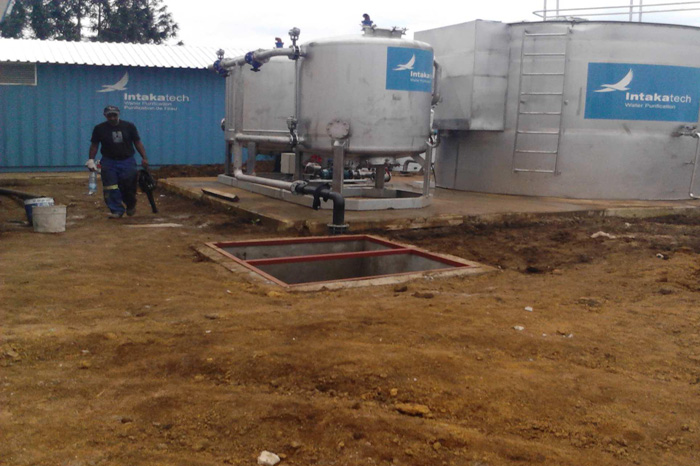 After 18 years of semi-drought, the village residents are welcoming the efforts made by the highest hierarchy of the country, who have just realised the promise that they made. The precious water harnessed at the Miaghassa river was received at a new-generation station ordered from South Africa. An experimental project has been applied at Pana, which has also benefited from the same South African based technology.

In Gabon where access to this vital resource is still unevenly distributed, and when sometimes rudimentary means are used to appropriate it, the Government is, over several years, making it available and accessible to all. This has been done through the construction of new facilities or the renovation and reinforcement of the existing ones. Such is the case at Bakoumba. In this village in Haut Ogooué, the drinking water facilities, which are nearly fifty years old, had become obsolete, consequently causing the water to become unfit for consumption. But salvation came from the President of the Republic, Ali Bongo Ondimba, who instructed the Government to build a new pumping and water treatment station for the town and its surrounds.

This preparatory site works was entrusted to the company Sitec-BTP. For The Chief Executive Officer of this companyplaced his technicians from the general management of hydraulic resources on site to ensure that the specifications were properly carried out.

The water captured from the Miaghassa River is received at a new-generation treatment station ordered from Intaka Holdings Pty Ltd in South Africa, consisting of a large solids contact clarifier and multi-media pressure filters followed by chlorination.

After 18 years of (semi) drought, it can be said that drinking water is coming back to Bakoumba. The people are benefiting from the promise made by the Chief of State, and are hoping that it will always be like this. The pumping plant and water treatment station at Bakoumba will revive the South-South co-operation. The facility had been ordered and constructed in Nelson Mandela’s country, with a delivery deadline not exceeding one month, contrary to orders placed in Europe which can take a lot longer. An experimental workshop which was implemented at Pana, also benefited from the same technology imported from South Africa for the pumping, treatment and distribution of water to this region’s residents. We are strongly hoping that the approved efforts will be of benefit to the entire region where many are (still) waiting for a water supply. One year ago, the Nzamaligue village finally had access to drinking water, thanks to the construction of a well and a drinking water distribution network. One year earlier, it was the region of Awoua (Bitam). The government has brought drinking water to this area using new technologies such as solar technology, for capturing water.