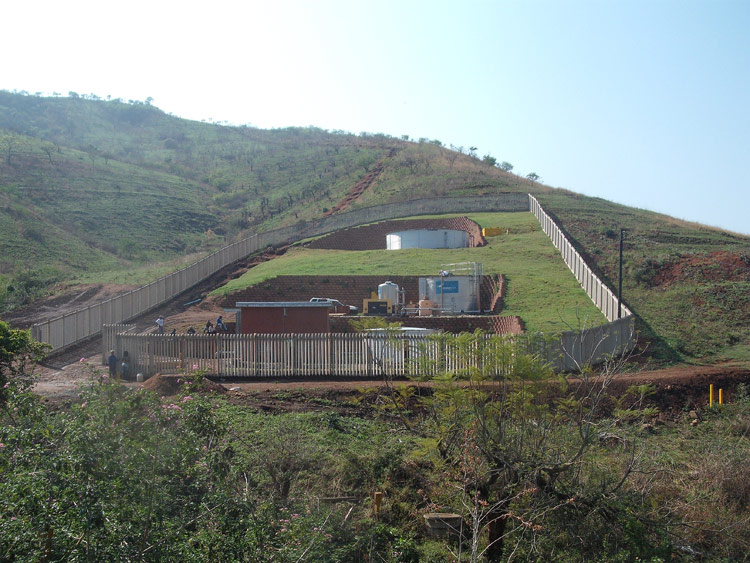 In December 2010, one of the twenty Intaka Tech Water Purification Plants (WPP’s) bought by the KZN Department of Co-operative Government and Traditional Affairs (DCGTA) in 2007, was delivered and installed in the Embuthweni area, situated about 12kms by road in a southerly direction from Mid-Illovo.

The WPP was donated by the KZN DCGTA to the Umgungundlovu District Municipality (UMDM), who incorporated the purification plant into one of it potable water delivery schemes in the Embuthweni area. SIVEST Consulting Engineers were appointed as the consultants for the project, where Intaka liaised with them in terms of the WPP.

In 2007 the UMDM briefed Intaka Tech that the scheme would supply 40 000 litres of potable water per hour, which was ideal for the model WPP050 that was donated, since it can deliver up to 50 000 litres per hour. The water source is the Lovu river, where the subsequent project was broken into two phases for potable water delivery to the community of roughly 17 000 people. Phase one would supply 25-30 litres per person per day (approx 500 kilo-litres), which would be upgraded to 50 litres per person per day (short of 1 mega-litre per day) in the second phase.

The site for the purification works was identified in 2007, but relocated to another nearby location due to land issues. The site works commenced in mid 2010 and were largely complete by December 2010 which prompted the delivery of the WPP050 for installation. Due to the lack of 3 phase power on site, the commissioning of the plant was pushed out to September 2011.

Intaka Tech and the UMDM’s representative, namely SIVEST, discussed the downgrading of the WPP to suite the potable water deliverables for phase 1, which SIVEST would manage and implement on behalf of its client, and upgrade accordingly at the onset of the second phase.

Intaka Tech arrived on site on the 14th September 2011 and commissioned the WPP 050 on the 19th September, which was accompanied by a training session on the same day. The attendees included one representative from SIVEST, four representatives from the UMDM and three people chosen by the Embuthweni community to assist the UMDM’s Operations & Maintenance Department.

The Intaka Tech Water Purification Plants are ideal such projects, particularly in rural areas where the current water sources do not warrant larger schemes, or where larger schemes are planned yet service delivery is a priority.

Such is the case with Embuthweni, where the Mid Illovo bulk water scheme is currently in the public participation stage. Water will be provided from the Pietermaritzburg treatment works and supplied via a bulk line of approximately 15 kilometres throughout the Mid-Illovo area, which will eventually bypass the WPP050 and directly feed into the Embuthweni scheme. It is estimated that this will take 2-3 years, and in the interim the Intaka Tech WPP will supply the necessary drinking water in terms of the UMDM’s service delivery commitments. Once the WPP has been decommissioned, it can be put to further use by the UMDM by relocating it to another area in need of potable water.