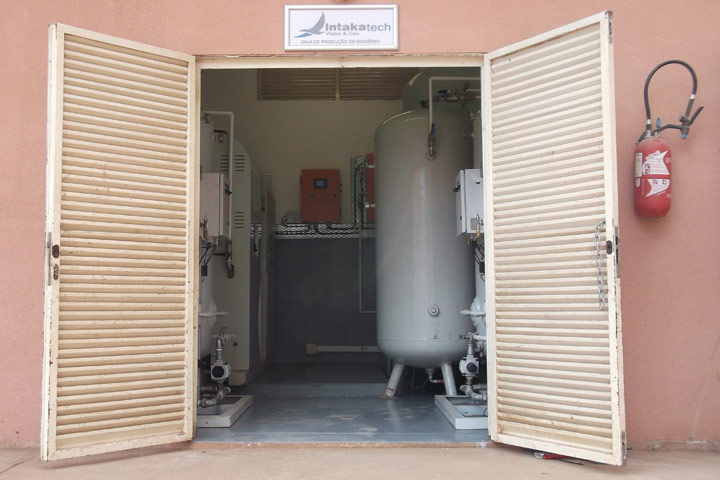 Hospital Maternidade Lucrecia Paim is a reference Maternity Hospital in Luanda Angola, they do an average of 120 births / day.

Intaka Tech was called in October 2011, to assess the Hospital needs and recommend the way forward for the Hospital to get the PSA and filling cylinders facility back on line (in order to save costs on Oxygen Cylinder and Bulk purchase).

Intaka Tech’s Technical team provided a recommendation which was divided into two phases as follows:

Full Preventative and Corrective Maintenance to be performed on both compressors currently installed.

Service the two current PSA systems, which produce 13 M3/H of oxygen each.

In May 2012 our partner in Angola, confirmed that the Hospital had approved our proposal and gave us the go ahead to proceed with both phases.

In November 2012 an Intaka Tech team successfully completed the 1st and 2nd phases of the project, meaning that the Hospital is now using the PSA system as the primary source, Bulk Tank as secondary source and Oxygen Manifold cylinder as the reserve source of supply for it’s oxygen requirements.

The Hospital technical staff,as well as Hospital Directors, are very happy with the conclusion of the project which will save a considerable amount of money in cylinder and bulk oxygen purchases. The technical team are also pleased as they no longer need to change and move cylinders around the hospital because the supply is connected to the pipeline running throughout the hospital.

The hospital is confident that they have taken the right decision engaging Intaka Tech in this project due to our experience and customer track record in Africa.

The Hospital is looking forward to the benefits of the new system which will enable the Hospital to fill their own cylinders to feed the cylinders gas bank and areas which doesn’t have main pipeline installed eliminating 100% cylinder purchase.

“Intaka Tech are very proud to be involved in such an important project assisting Hospital Maternidade Lucrecia Paim to achieve independence by means of producing their own oxygen on site” says Dr Gastón Savoi, Intaka Tech Chairman.