Home   /   Corporate, News   /   The Intaka’s Plants – A First for the Healthcare Industry in Africa 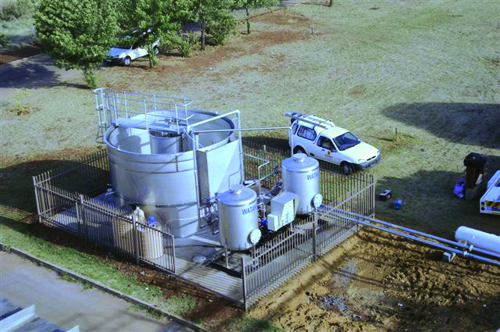 Making great strides in water purification as well as oxygen and medical air generation for the health care industry in Africa, is Intaka Tech. This company has been diligently laying firm foundations here over the past few years, and in so doing is steadily building an enviable name for itself throughout the continent.

The equipment Intaka manufactures and markets, is making such a positive impact on the health care industry, because of the equipment’s mobility and the ease with which it can be operated and maintained.

Water purification, oxygen and medical air generation, which are crucial procedures for health care, can now be carried out at any health care facility no matter how remote the location.

Intaka Tech’s unique, yet cost-effective systems produce water and oxygen of a quality that is fit for human consumption. In addition to the medical arena, this equipment can be used in numerous other industries, such as construction and mining, in fact any application that mobile water purification and gas generation applications are required.

Already the company has well over 200 systems in operation in a variety of local hospitals and rural communities throughout South Africa and neighbouring countries. The number of installations occurring is multiplying rapidly these days.

Medical air is supplied to the oxygen concentrator producing on-site medical oxygen inside a containerized system.

A case in point is the medical industry in KwaZulu-Natal. Orders have been placed for Intaka Tech oxygen and medical air generation systems to be installed in 52 hospitals in this province. To date 14 systems have been delivered for Phase 1 of the project.

One of the systems that has been in operation in South Africa for the longest amount of time, is the oxygen and medical air generation system, Model GGS030, which was installed at Murchison Hospital in the Ugu district of KwaZulu-Natal, in May 2005.

Murchison is one of the four public institutions in the country that was chosen as a pilot site for the self-generating oxygen and medical air systems, and according to the Hospital, this system was a key attribute that put the institution on the map.

A top authority in the Department of Health, KwaZulu-Natal explained that, “The oxygen and medical air generation system at Murchison was originally installed as a pilot project to ascertain the benefits of self-generating oxygen and medical air, as opposed to cylinder or bulk oxygen… The unit has since installation, been operating well and we can rest assured that only the purest oxygen is being fed into the main hospital lines. From an administration point-of-view, Murchison is also benefiting from the cost savings and convenience of not having to wait for delivery of oxygen cylinders.”

The spokesperson for the Department of Health states that due to the use of the selfgenerating oxygen and medical air system, the Hospital has derived an impressive 30% cost saving per month.

The atmosphere that the oxygen and medical air systems use is limitless and free, which is one of the reasons why their operating costs are very low.

Murchison prides itself in setting standards, and this project has seen the Hospital being used as a benchmark by other public institutions.

Two hospitals located in rural areas have also received the Intaka Tech Model WPP025 water purification plants, which have been supplying potable water for almost two years to date. One of the installations was at Appelsbosch Hospital in the New Hanover district of KwaZulu-Natal. A spokesperson said, “It was installed after a concern that the water there appeared very turbid, and this led to doubts as to the water being safe for drinking and general hospital use.

The Intaka Tech water purification plant was selected after due procurement processes, which showed Intaka to be the most suitable company to deliver on Departmental requirements.

One of the core values of Appelsbosch is to be a continuous seeker of knowledge and to be informed of all new developments. The use of the water purification plant supports this value.

While health care challenges in primary health care organisations in South Africa and to a far greater extent in Africa, are enormous. Reports reveal that since 1994 alone, 2 298 clinics have been upgraded and given new equipment. Having contributed to this upgrading, Intaka Tech is totally committed to all further development of this industry sector. Its expansion programme will enable it to continue to work in conjunction with the medical industry to enable it to confront and deal with the industry’s challenges, and improve the overall efficiency of the health care delivery system.