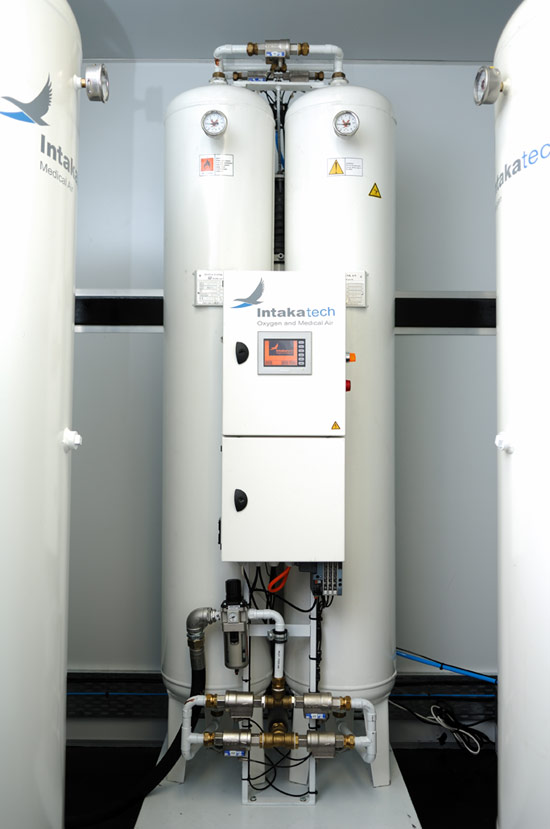 Hospitals used to have two choices for supplying medical oxygen to their medical gas network. Depending on their consumption, they could either purchase liquid oxygen stored in a bulk tank or oxygen cylinders that had to be replenished at regular intervals. During the past 20 years however, the Pressure Swing Adsorption (PSA) Oxygen System has made its way onto the market as a viable alternative for the supply of medical gas in hospital distribution systems. The PSA Oxygen System enables oxygen to be produced on site at the hospital from the air that we breathe, thus overcoming potential delivery, storage and handling issues.

Intaka Tech is the only South African manufacturer of mid-sized PSA Oxygen Systems and has successfully installed over 100 of these systems in hospitals in Southern Africa. Celso Dos Santos, the Head of Intaka Tech’s Gas Generation Department, says, “The manufacture and installation of a PSA Oxygen System for the supply of a medical gas distribution system in hospitals has been described in international standards such as the European ISO 10083, the British HTM 02-01 and the American NFPA 99c. According to these new standards, an oxygen plant must consist of three independent sources of oxygen supply. We recommend this approach in order for all hospitals to achieve maximum safety. We offer our clients one PSA Oxygen System as the primary source of supply, an additional one of similar capacity as the secondary source of supply and a manifold of cylinders that are continuously filled from the PSA Oxygen System as the reserve source of supply.”

The PSA Oxygen System uses advanced Pressure Swing Adsorption (PSA) technology to separate nitrogen from the oxygen and other gasses in the air through a molecular sieve. The oxygen then passes through the outlet of the PSA generator and is stored in a buffer tank – a cycle that is repeated indefinitely.

Although initially developed for use in remote areas, PSA Oxygen Systems are now supplying medical oxygen (known as Medical Oxygen 93) to many city hospitals in North and South America, Africa, the Middle East and Asia at a competitive price compared to purchased gas. Dos Santos explains, “PSA Oxygen Systems are gaining wider and wider acceptance because not only do they provide a cost effective supply of oxygen on demand, they also offer a number of additional benefits.: He shares, “The atmosphere that the systems use is limitless and free which is primarily why the operating costs are very low. After amortising the cost of the equipment, the price tag for producing gas is equivalent to the cost of the electricity required to operate the PSA Oxygen System as well as the periodic maintenance of the system.”

He adds, “As the PSA Oxygen System constantly produces oxygen at 5 bar pressure from the atmosphere, there is no need for oxygen to be stockpiled. Oxygen cylinders, on the other hand, are filled to pressures of up to 200 bars and need to be secured with chains to prevent them from falling over. In the event of this happening the valve could be damaged and can cause the cylinder to become an uncontrolled missile – posing a major safety risk.”

Oxygen 93 has been registered as a medicine in the US for a number of years although Europe only registered in April 2011. PSA Oxygen Systems are also considered medical devices by the European directive 93/42/EEC and the Medical Control Council in South Africa. For this reason, manufacturers must be certified by an authorised body according to ISO9001.

Intaka Tech has recently won a Gold Business Initiative Directions (B.I.D) award at the 14th annual Century International Quality ERA Convention held earlier this year in Geneva for its expertise in technology, innovation and expansion along with its leadership and business management excellence